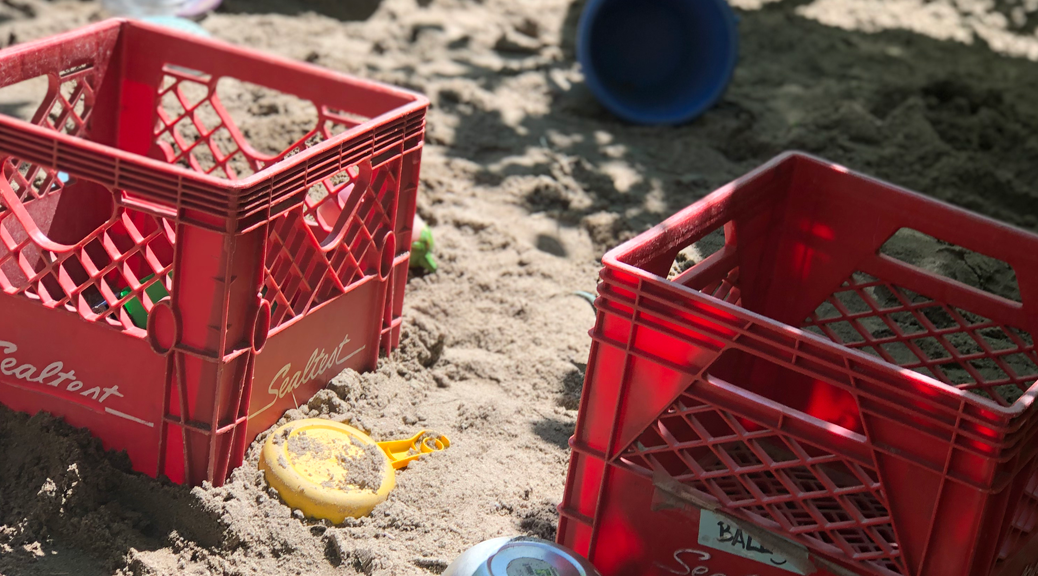 In a toddler classroom, we began by being curious about running and thinking with questions of running and of what running ‘does’; what running creates, what running produces, what running invites, what consequences running generates. This makes me curious about how we get to know running. With what ideas or concepts or inheritances or relations do we build our understandings of what running does or how running happens with children? For me, when I try to name how I understand running, I think often about space and I consider running in relation to spatial considerations: running around bookshelves, running across tile floors, running in tight quarters. Another familiar way that I understand running is in relation to place: running on slippery grass, running across crosswalks, running on really hot days. My phys-ed training always makes me think too about running as gross motor skill: running as a form of locomotion, as an activity that happens at a high intensity, as a way to exercise our bodies. Space, place, and motor skills are then, for me, familiar ways of getting to know running, and they all have particular consequences for how I notice running, how I interpret running, and how I create conditions (spaces, rules, relations) for (or not for) running.

I think it is very interesting to wonder how we might get to know running differently – what if we try to notice running without our familiar practices of understanding running? How might we pay attention to running using other knowledges or concepts or curiosities? What other questions might we ask of running, questions that activate our pedagogical intentions and orientations? Why does running matter to me – what ways of being in the world does running open up to, and why am I interested in creating space for these? What rules and boundaries do I put on running and why – and are those rules that I am willing to stand for or rules that I’m interested in complexifying? I think there are so many questions about running that are super timely, especially as technical and exercise-oriented conceptions of running become increasingly prevalent in ECE (that is, understanding running first or only as a motor skill or as vigorous physical activity). What happens if we pay attention to running without thinking about it as something technical or taken-for-granted or to always be controlled, and instead ask other questions of running: what does running do, here, in this moment? How is running happening right here and what does this create? How do we run with the lives and constraints and conditions of the particular spaces and places where we move?

This reminds me of Abigail Hackett’s work on children’s movement in museums (Hackett, 2014; Hackett, Holmes, MacRae, and Procter, 2018) . Hackett (2014) writes about children’s running as meaning making in museums, where usually museums have particular ways of understanding running (for example, that museums see running as something to be prohibited because museums are supposed to be about moving slowly and taking in information by looking, feeling, or reading). For Hackett, running in museums becomes a way for very young children to create connections to the museum space and to communicate with one another. She talks about running as an intentional way of getting to know a place for children. Hackett also speaks about a reciprocity or back-and-forth between place/space and children’s running, where children build particular relations with a place through running.

Hackett (2014) suggests that “the modal choice of running and walking in the museum has communicative properties that spoken language and even gesture would not afford; it is extremely effective in drawing others’ attention to areas of the museum, linking self with specific aspects of the space and also impacting on that space – that is, place making…In using walking and running as a modal choice, young children are making specific and intentional choices about where they go and how they go, in terms of physicality (running, jumping, dancing), in terms of the way they combine walking with other modes (e.g. gesture and words such as ‘zigging and zooming’ in example two) and in terms of how they involve or work with other children to implement this communicative practice” (p. 23)

For Hackett, running is not an individual nor inherently chaotic activity. Running, in my understanding of Hackett, is communicative. It is how children get to know place, and one way of figuring out how to move with a place – what Hackett (2016), following Ingold (2007), calls wayfaring. This raises, for me, questions of what is entailed in running communication: is running communicative because one human uses running to express an idea or emotion to another human? Or is there more to running in complex worlds? How does running implicate us in worlds and world-making?

If we want to think running as something communicative and relational, how do we care for how moving isn’t an activity that isolates a child/human from where we run? Hackett and Rautio (2019) offer that “thinking about running non-anthropocentrically involves attending to processes of bringing into-relation. This is to say, we think of running as a response, as children answering the world (Ingold, 2013) rather than as movement initiated or invented by child bodies” (p. 1022). This adds, I suggest, another layer onto the question of what running does: how does running entangle us in a place? How does running draw us into relations with the world? If we want to think about running and movement as communicative, how do we notice who (which lives, which materials, which elements, what relations) communicates within running encounters (and how)?

Hackett, A. (2014). Zigging and zooming all over the place: Young children’s meaning making and movement in the museum. Journal of Early Childhood Literacy, 14(1), 5-27.