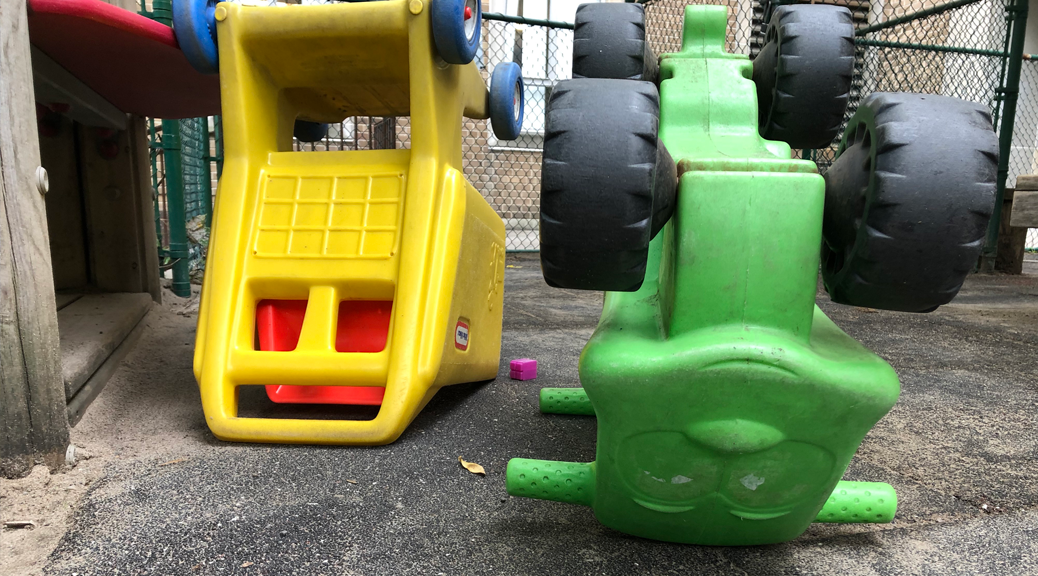 We thought with the children with a provocation of flipping over the vehicles (so they were belly and tires up) to try to ‘get to know’ them differently, and to see what happens if we shake up the children and vehicle’s well-known pathways around the yard. Often, we have noticed, the children use the plastic vehicles on familiar pathways, running around a shelter in the yard. How might we notice how we communicate with/in movement if we intentionally try to disrupt our well-travelled pathways?

When we flipped over the shorter red vehicle, D and N and I noticed that we could see into the space around the wheels, and there was lots of dirt and web in the wheel wells. As we were looking into one of them, we noticed a spider crawling around. We wondered what the spider was doing – it seemed like it was hanging out, not moving a lot. N crouched right over the wheel well, watching the spider very carefully and trying to put his finger as close to it as he could. D started to spin the wheel and the spider started to move and skittered down the front of the vehicle. Then, D flipped the vehicle back over. After sitting on top of the vehicle, he leaned way over and wrapped his fingers around the edge of the wheel well, saying that there was a “spider under here”. I wondered out loud if the spider was still there, and what the spider might do if he tried to use the wheels. D thought that the spider was “scared away” and started scooting the red vehicle around, while still looking under the wheel. I wondered if there were spiders in the other wheels and D stopped driving and started stretching all around the vehicle, trying to see all angles. We noticed that hanging off the back was a knot of what seemed like older, or at least more thick, spider webs. I said that it looked like there was some spider web holding on to the back of the car and D started moving, looking back to see if it was still holding on. It was. The web kept “hanging on the back” as D kept mentioning, as he’d push off and slam on the breaks to see if it would fall off or stick with him.